I’ve had several conversations recently, with writers, referencing the nature of story. Where they come from, how we access them. How we write them. Story as separate from the writer, even when it’s ours & we’re the ones writing it. How the stories are already made; we just have to find them.

And on her blog, Louise Beech does the synchronicity thing again. (It’s like she’s in the room!) She talks about the ‘magic‘ – how she ‘finds her stories by writing them.’ How it’s the very mysteriousness of the process that fascinates her.

Then, only the other day I came across this quotation from Virginia Woolf, in a letter to Vita Sackville-West. As a constant reader of Mrs Woolf in one form or another, it’s one I’m familiar with & another wee sliver of consonance.

‘I believe that the main thing in beginning a novel is to feel, not that you can write it, but that it exists on the far side of a gulf, which words can’t cross: that its [sic] to be pulled through only in a breathless anguish.’

Anguish aside – let’s not – the nub of the quote utterly resonates with me. It applies not only when one begins a novel but throughout the entire process. Because the unfolding of a novel is alchemy. It begins with the initial ‘What if?’ moment & flows into the witchery of what follows. Mrs Woolf’s words provide a perfect backdrop for my current process.

Months back I submitted myself to the structural editing process. Wild Spinning Girls was as done as I was able to do it. And yet not. I didn’t believe this anymore than my excellent editor did & when she dared me & my manuscript to do better, the magic began. A new approach was called for – one which, because the right question was asked: ‘Where does this story come from?‘ instantly changed the fundamental nature of the thing & found it’s heart.

And now, several months down the line, homework done, I’m being tested again. This time it’s a pre-copy edit; the more personal one that comes when an astute editor looks beneath & sees aspects of the story you not only missed pre-structural & even post-, they were almost invisible anyway. Like a covering cobweb in the early morning, a fine net obscuring what lies beneath. These are the slender threads that, if you tie them up correctly, will fine-tune your story.

I have a deadline, which I prefer to call a Plan. (Aquarians thrive on Plans.) It’s the first of July tomorrow & the moon goes dark. As shall I. Radio silence on social media, for the most part at any rate. Total concentration, a new bag of breadcrumbs & off to the wordy birdy wood. 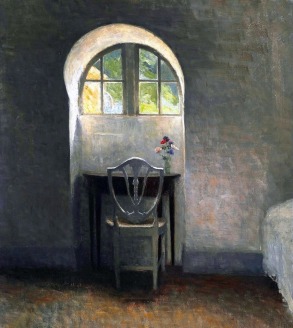 6 thoughts on “It’s in there somewhere…”

Only May
Follow Making it up as I go along on WordPress.com
Join 166 other followers